Fashion month is well underway and the past week we have been enjoying watching the events of Milan Fashion Week SS18 unfold. There’s been so much incredible style, both on the runways and in the streets and the week’s designers have done a great job of bringing fashion that feels fresh and exciting to the table. We wouldn’t expect anything less from Milan, after all, it is of course one of the most fashionable cities in the world. Here’s some of our style highlights from the week.

Moschino is known for bringing exciting and creative shows to fashion week and we always look forward to seeing what the label comes up with next. Director Jeremy Scott lived up to expectations with a show that incorporated everything from rock chick my little pony to Gigi Hadid dressed as a bouquet of flowers, proving that fashion can be super fun. In June, Scott told Harper’s Bazaar “I’m just trying to raise a smile (…) clothes aren’t meant to be worshipped at a church altar. I have a different approach to most designers.” We love his approach, after all why does fashion need to be serious to be stylish? 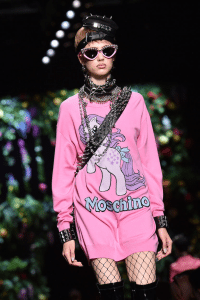 The Versace show in tribute to the late Gianni Versace and hosted by his sister Donatella did something very special that we would love to see more off in fashion. It shook up the typical runway conventions and starred some of the iconic supermodels of the past, proving that fashion week isn’t only for younger women. Walking the runway were original 90’s supermodels Naomi Campbell, Cindy Crawford, Claudia Schiffer, Carla Bruni and Helena Christensen who are all in their 40’s and 50’s and looking incredible. Style wise, these shimmery glamorous gowns are everything, don’t you agree? 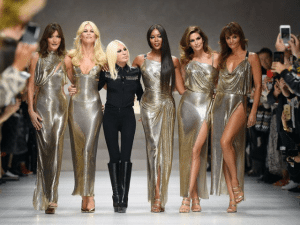 Gucci’s creative director Alessandro Michele collaborated with Elton John on a capsule collection that was inspired by the singer’s Glam rock style. The collection contained 13 men’s and women’s looks all of which were unique and wonderful in their own way. The runway looks managed to pay homage to the 80s, a decade that has been influencing the catwalks for a while now, and be super fresh at the same time. The show had a nightclub feel to it, with strobes and hazy lighting, and while this made it difficult for attendees to see the clothes, it added to the feeling of mystery and intrigue. 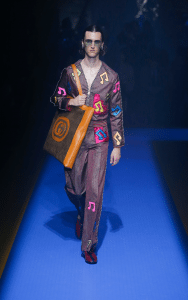 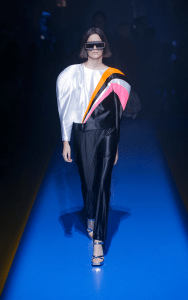 While we are often seen in head to toe black (after all you can’t go wrong with black) it doesn’t mean we don’t get excited by prints. The Milan Fashion Week street style is suggesting that the print of the moment is Polka Dots. The polka dot print hasn’t been in fashion for a while now so we are happy to see it making a comeback as it’s such a cute and feminine print that we can have a lot of fun with. Fashion Week attendees were wearing it on full outfits and large pieces such as dresses and jumpsuits and the polka dot colour scheme of choice appeared to be mostly black and white. 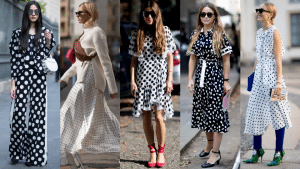 Lingerie inspired fashion is a trend that we know and love but what about fashion inspired by nightwear? This cosy look was rocked by some of the coolest people on the streets of Milan and we have to say we are inspired to try it out ourselves. Traditional silk pyjamas seemed to be the nightwear inspiration of choice and this look surprisingly fit right in amongst the more high maintenance street style looks this fashion week. 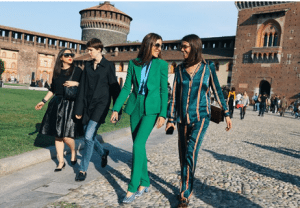 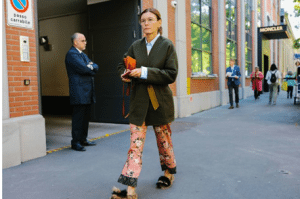 Every fashion week we look out for the colour schemes that dominate both the catwalks and the streets and at Milan SS 18 the colour of the streets appeared to be red. This is something we can get behind, wearing red makes us feel super powerful and sassy, and is a great colour when you want a stylish way to stand out. Then Milan fashion crowd seemed to be going for a full-on look and rocking the bold colour from head to toe, a brave choice that has paid off with some looks we seriously love. 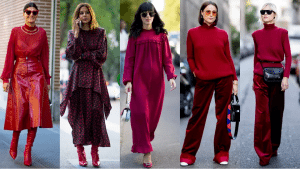 So there you have it, KOKO Couture’s style recap of Milan Fashion Week 2017!

We would love to hear your views on all things fashion, so if you have any favourite fashion week style moments that you think should be in this article please let us know! Next stop Paris!

If you enjoyed this recap, be sure to check out our post on London Fashion Week SS18 – Favourite Runway Looks.